“My name is Lars-Magnus Larsson and I’m 47 years old. I built my first model when I was 12 years old. It was an A-Ford and it did not get so nice, but interest was aroused and soon more models were made. 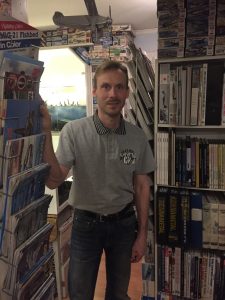 In the beginning, I built most cars. Soon my interest changed to aircraft and tanks. When I was 13, I became more and more interested in military history, which I combined with my model building. It continued until late teens when I stopped until 2001.

Then I started building again and now more seriously, because at this point I had gained deeper knowledge in both military history and model building.

My models are in scale 1:72, which is useful if you have a large collection and limited space. My profession is metal worker and I live with my wife Victoria and my two daughters in a villa outside Ljungby. “